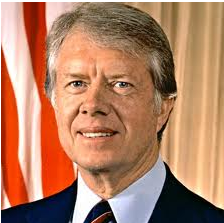 Jimmy Carter
James Earl 'Jimmy' Carter Jr. was the president from 1997-1981. 39th U.S president. Carter was born on October 1, 1924 in Plains Georgia. Jimmy's father, James Earl Carter Sr., was a farmer who owned his own small part of land. He also had a warehouse and a store. His mother, Bessie Lillian Gordy, was a nurse. Jimmy began working for his father on the farm at the age of ten.

Jimmy Carter went to school at the Georgia Southwestern College, Georgia Institute of Technology. Jimmy became president when the Iran Hostage Crisis happened. Jimmy tried to get re-elected but failed. He lost to Ronald Reagan. Who then took over and the hostages got released. Jimmy attempted to rescue the hostages by using the Operation Eagle Claw. That plan had failed and it left 8 men dead.