April 24, 1980 was the day Jimmy Carter had tried to save the 52 hostages. Carter had a plan that he was working on, he tried saving the Hostages on this day. This was a secret mission to go and rescue the Iran Hostages. The mission was called the 'Operation Eagle Claw' also known as O.E.C. That plan failed and left damaged helicopters and dead men. Eight of the service men that were going to rescue the hostages had died unfortunately. No one who was being held hostage died, everyone survived except the brave men who went to save them. 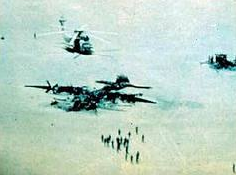